From the mentioned starting point you can go on a wide variety of tours:

Easy trail with nice views takes you from Sedlo pass (which can be reached on foot following ski slope) under the south wall of Prestreljenik mountain to the trail that leads from station D towards the Prestreljenik window. From there you can reach the window or descend back to station D.

The moderately demanding route leads through a spectacular alpine karst landscape full of interesting landforms. From the Veliki Graben valley, the trail climbs to limestone pavements full of shafts and snow kettles. From the Dom Petra Skalarja hut, the trail follows a ridge with breath-taking views until joining the trail that leads from station D towards Visoki Kanin mountain. From there you descend back to station D. Note: Dom Petra Skalarja hut is closed.

The mighty mountain in the border ridge rises just above station D of the cable car. From the top, there are beautiful views of the surrounding mountain ranges (all the way to the High Tauern and the Dolomites), and in the south, in fine weather, you can see the ships in the Gulf of Trieste. The Prestreljenik mountain got its name from the picturesque natural window west below the summit.

DESCRIPTION OF THE ROUTE: from station D we ascend along the ski slope to Sedlo pass, from where a nicely marked path leads us over a steep eastern slope to a scenic peak.

A well-secured via ferrata follows the shelves along the south wall of Prestreljenik all the way to the picturesque Prestreljenik window.

ROUTE DESCRIPTION: from station D we follow the ski slope to Sedlo, from where we ascend in the direction of Prestreljenik mountain to the start of via ferrata. We follow the shelves, secured with a continuous steel cable, all the way to Prestreljenik window. From there, via scree, the path leads back to station D.

The border peak rises high above the Soča valley, Rezija (Val Resia), and Reklanica (Val Raccolana) valleys. It is the highest peak of the Kanin Mountains and one of the highest peaks in Slovenia.

DESCRIPTION OF THE ROUTE: from station D, follow the marked path above the Veliki Graben valley to the edge of the Kanin plateau below Hudi Vršič mountain. The path then leads us just below the border ridge with beautiful views of the unique landscape of alpine karst. Already near the top, we ascend to the eastern ridge, along which we reach the top by climbing.

A memorial near the Prevala pass was erected in 2018 in memory of the last victims of the First World War on Slovenian soil. In October 1917, Italian and Austro-Hungarian troops clashed on the southern slopes of the Lopa (Monte Leupa) mountain.

DESCRIPTION OF THE ROUTE: from station D we ascend to Sedlo pass, where we find the beginning of the marked path that leads to the left of the chairlift to the Prevala pass on the border between Slovenia and Italy (you can also go down the ski slope). From the pass, the marked path that leads to Rombon mountain first climbs slightly and then leads horizontally to the monument by a large rock.

6. TO BOVEC THROUGH KRNICA VALLEY

Fit mountaineers can also descend from Kanin to Bovec on foot. From the karstic alpine landscape with the remains of perennial snow, we descend through the picturesque Krnica valley to the lush beech forests and on to the center of Bovec or to station A of the cable car.

DESCRIPTION OF THE ROUTE: from station D we ascend to Sedlo pass, where we find the beginning of the marked path that leads to the left of the chairlift to the Prevala pass on the border between Slovenia and Italy (you can also go down the ski slope). From the pass, the marked path descends into the Krnica glacial valley, after which we descend to the mountain pasture of the same name. From there, a beautiful, wide path leads us through a shady beech forest to the contact with the “Kaninska mulatjera” trail, which comes in on the right from station B of the cable car. The trail can be followed all the way to station A, however slightly lower another marked path branches off towards Bovec.

Some hiking tours are challenging. Adapt your tour according to your physical abilities and do not forget the appropriate equipment. Check the weather forecast before the tour and learn about the difficulty of your tour. All activities take place at one's own risk.

In case of accident call 112 immediately. 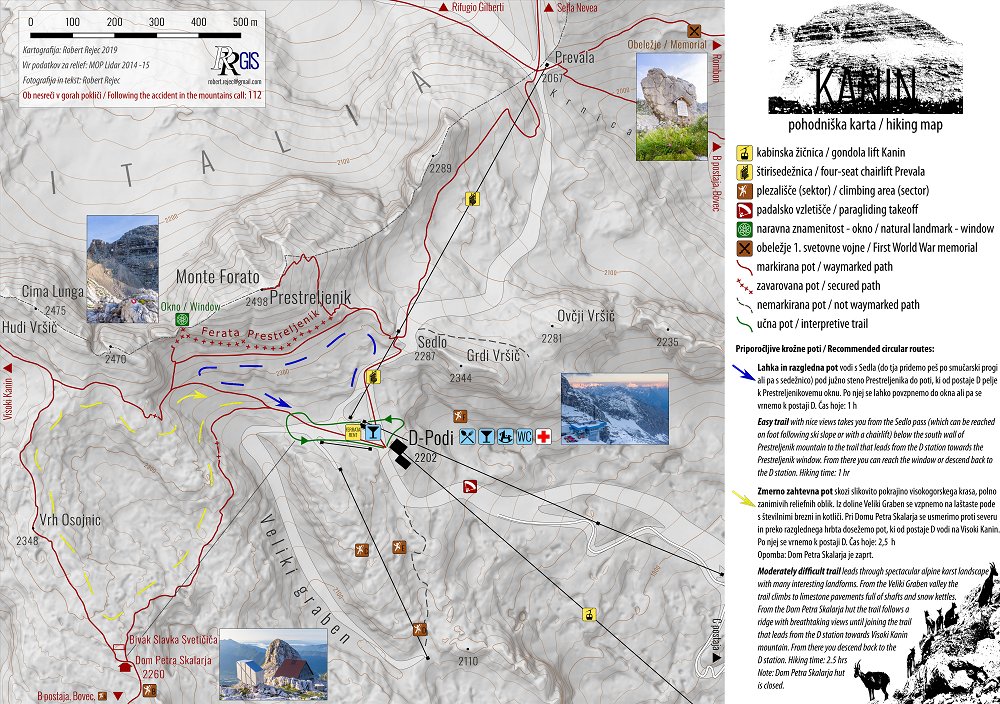